One of the overwhelming experiences I received while on my summer trip was that when I imagined my dreams becoming a reality? I kept getting a nudge from God that “It’s going to be BIGGER than that!”  As I stood on the edge of the Grand Canyon, God kept saying, “it’s going to be BIGGER than that!”  Not because my dreams were all going to become a reality, but to help me understand that I might not be able to dream AS BIG as HE can.

And it wasn’t just bigger.  It was going to be HARDER!  As I walked through Hoover Dam and marveled at this incredible structure that men and women built and how difficult the task they had was, I felt God saying to me “It’s going to be HARDER than that!”  What?  I didn’t want to hear that. I want my dreams and visions to be easy!  But God was using the illustration of their work ethic to help me see that we (the human side of the equation) were going to have to put some serious work into this too.

It wasn’t going to be just bigger and harder, it was going to be MORE.  I spent one night in Vegas as a stop over between LA and Phoenix.  I’d never been there and I was like a kid from the country who had never seen the big city when I drove down the strip. As I walked through the “mall” under Ceaser’s Palace I was wowed by the money spent to create such an environment.  I kept hearing God speak into those dreams  ones that I knew were going to invest a significant amount of money into communities and around the world (even more than I was comfortable with), and God told me “It’s going to be MORE than that!”  What?  Seriously… where’s all that money and resource going to come from? Even with those questions in my mind, I felt nothing but peace as I asked them. 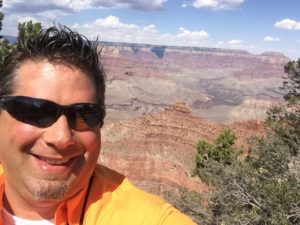 One of the best parts of my trip was flying home from Arizona with a layover in Detroit.  I was looking over my journal and making notes.  I was looking over the words “Bigger, Harder, More” and began to realize that all of these dreams inside of me didn’t even come close to the scope of what God could do. I began to contrast how wowed I was by what men had created in Las Vegas, yet it really was NOTHING COMPARED to the glory of driving through Glacier National Park and witnessing what GOD had created. As I compared the amazing work of engineering at the Hoover Dam, it didn’t even come close to the Master’s design of the Grand Canyon.

As long as they are God’s dreams, it is going to be bigger than I could imagine.  If God’s doing the work, it may seem hard from my perspective, but He will be carrying the real weight.  If God’s funding the project, it may be more than I could ask or imagine, but it’s pocket change to the Creator of all things!

Since that trip, I’ve made a promise to myself to change my pace every once in a while.  Move from the comfort of my A/C office and lazy-boy at home into some new spaces I’ve not yet experienced. I know the change of perspective will come.

Where are some of the places that you’ve encountered God in a unique way?

Do you make it a habit of changing your surroundings in order to help change your perspective?