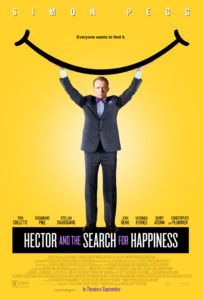 So, I don’t usually make it a habit of recommending movies, but every once in a while one just has to be talked about. Especially one I’ve never heard of.

One night while glancing through the “Recently Added” on Netflix, I came across Hector and the Search for Happiness. I really only stopped on it because I am a fan of Simon Pegg and after recently watching the last Mission Impossible – I’ve been on a spree of watching his old movies I enjoy (Hot Fuzz, How to Loose Friends and Influence People, The World’s End).

This movie is based on a book with the same title by Francois Lelord and is all about a psychiatrist named Hector who takes an epic journey while trying to discover what makes people happy! It’s a more serious film for actor Simon Pegg, and I really enjoyed him in it. His girlfriend Clara, played by Rosamund Pike, is also quite good in her role and I could have used more interaction with her in the movie. A relationship stunted by emotional barriers is the 3rd primary character of this story.

However, the BIG reason I think everyone should now see this movie is because of the questions that are asked 100x in the film.

“What makes you happy? Would you consider yourself a happy person? Where does happiness come from?”