“Out of Context” is a series dedicated to verses of scripture, often used in today’s conversations, that have little to do with the context by which it was written.

Context | (1) the circumstances that form the setting for an event, statement, or idea, and in terms of which it can be fully understood and assessed; (2) the parts of something written or spoken that immediately precede and follow a word or passage and clarify its meaning.

Jeremiah 29:11 “For I know the plans I have for you,” says the Lord. “They are plans for good and not for disaster, to give you a future and a hope.”

This has to be one of the top 10 verses that I hear Christians use today that has little CONTEXT for when and how they use it.

Sometimes it’s innocent, like an email signature or an encouraging verse for the day.  However, most of the time it’s read (all by itself) by a high school student getting ready to go to college with the promise that God has great things in store for them. Or by the person getting ready to go on a mission trip and are excited about the “good plans” God has in store for them… and no bad plans. Or it’s in a social media post that goes along with someone’s brand new goal in life (new job, new city, new opportunity) in which they claim that God is leading them and has nothing but sunshine and success waiting for them.

God does have a plan for your life. Don’t get me wrong.  He does LOVE that you’re stepping out of your comfort zone to go on that mission trip or move to a new city where He’s given you a job opportunity. However, there are more verses in scripture that better align with those circumstances than Jeremiah 29:11.

I would guess that more than 90% of people who have ever spoken this verse has absolutely NO IDEA the context in which this Word from God was given to His people. However, if you just read the 5 verses before it – it would be very clear.

(Verses 1 – 4 tells us that Jeremiah wrote a letter to the elders, priests, and prophets who had been conquered and exiled to Babylon as a message from the Lord to all of those captured and exiled to this pagan nation.)

5“Build homes, and plan to stay. Plant gardens, and eat the food they produce. 6 Marry and have children. Then find spouses for them so that you may have many grandchildren. Multiply! Do not dwindle away! 7And work for the peace and prosperity of the city where I sent you into exile. Pray to the Lord for it, for its welfare will determine your welfare.”8This is what the lord of Heaven’s Armies, the God of Israel, says: “Do not let your prophets and fortune-tellers who are with you in the land of Babylon trick you. Do not listen to their dreams, 9because they are telling you lies in my name. I have not sent them,” says the lord.10This is what the Lord says: “You will be in Babylon for seventy years. But then I will come and do for you all the good things I have promised, and I will bring you home again. Jeremiah 29:5-10 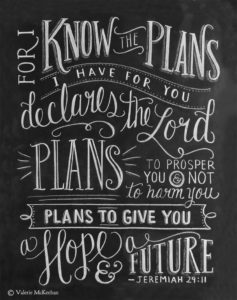 I doubt that most people uttering this verse as encouragement understand the emotional weight by which this letter was given.

God’s people were told that for the next 70 years they needed to persevere through a dark and dangerous time within a pagan nation and PLAN TO STAY THERE!  Keep multiplying, allow your kids to be married off (which would mean marrying Babylonians) and do not allow false prophets to lead them astray.  My favorite part is that they had to “work for the peace and prosperity” of this pagan nation.  Pray for it!  Their welfare will determine your welfare!!!

At a time in which many Christians in America wrestle with our morally struggling culture – I’m not really sure you WANT THIS VERSE to apply to you. That the peace and prosperity of YOUR CITY were in your hands and that its welfare would determine your welfare.  I think we would see the end of our protective Christian bubbles that cause us to huddle together rather than “bless the nation” as our faith was intended to do.

It’s only after this time of exile that God will bring them back – but that didn’t necessarily mean “them” personally. It meant “them” as a nation!  God’s promise wasn’t individual in nature (as we claim this verse to be), it was (as many of promises of God) attributed to the whole of God’s people.

God did have good plans for His people. His name is Jesus, and he would not show up for another 600 years.  There were many days of earthy success for them, but also many days of disaster that still came to God’s people through multiple rulers and empires after Babylon.

God did have good plans for His people. His name is Jesus

Please understand, I appreciate the heart behind those who use this verse as a way of encouraging those around them – that God has a HOPE and FUTURE for them. I believe that! However, we need to be cautious when we use verses like this that were written VERY SPECIFICALLY to God’s people during a VERY SPECIFIC period of time.

There is much to learn from this passage about the character of God and His heart for His people. I hope the true context of this verse comes to mind the next time you read it in an email or see it on a bumper sticker.  That even when we are struggling and feel removed from God’s plans – He has not left us.

Even when we are struggling and feel removed from God’s plans – He has not left us.

I hope you enjoy the “Out of Context” series of blogs.  I’d love to hear some examples of verses that you’ve had experience with being used out of context.  Please leave them in the comment section below.